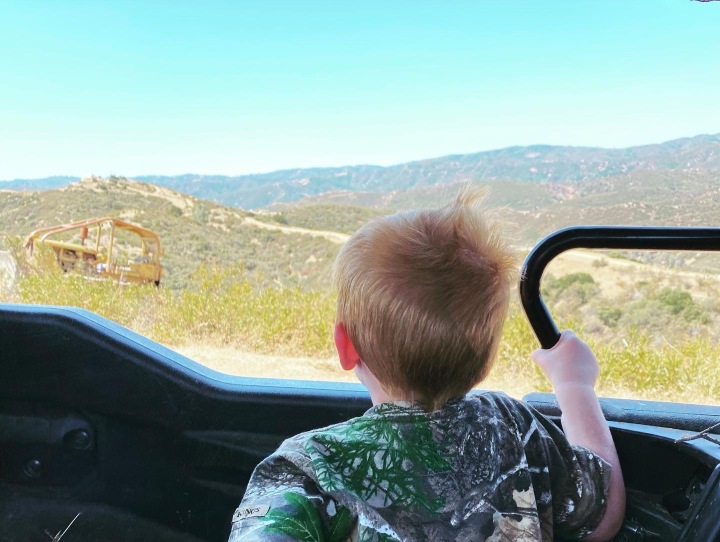 When we first started dating, AJ told me that there were only two things in his life that were nonnegotiable, one of which was Deer Season. This was a new one for me. I wasn’t a big hunter so didn’t really think much about it or really understand the importance. It wasn’t until I was finally invited to join them at deer camp that I began to understand why it was such an important thing in his life.

AJ and some friends have a ranch property a few hours south of where we live that they use for deer hunting. Every August he loads up his truck and the trailer to head down to his “happy place”. There’s no cell service and it’s honestly the most peaceful place I’ve ever been. It took him three years to invite me to go with him and this just past weekend, we decided to take the trailer down a few weeks early and bring the kids along for a little dry camping!

It’s a 3+ hour drive down and fortunately the kids slept most of the way. We brought plenty of snacks and I hit up the Dollar Tree for some fun little games and toys to keep them busy. Once we finally made it to camp, we got everything set up and the kids made themselves comfortable on their bunkbeds reading and playing peek-a-boo. I was a excited to see how the kids were going to do and really had no idea what to expect. It’s pretty much in the middle of nowhere and it gets HOT. Dry camping with two toddlers can come with a whole host of challenges! Luckily we have a generator for the trailer so we are able to have some AC to fight the heat. It was great to see the kids using their imaginations and make their own fun playing in the dirt and exploring. There was so much for them to see so there was no way they were going to get bored!

Emmie’s godfather has been a really close friend since he and AJ were in college and he happens to lease the ranch with AJ. So when he heard we’d be heading up with the kids there was no doubt he’d be there with us! Once he met up with us, we loaded up the side-by-side and headed out to explore with the kids. Emmie has been sensitive to loud noises lately so I was really happy she was so excited to go for a ride- she was so excited she fell asleep 10 minutes into it! The ranch has so many old machines and tractors everywhere so watching Oliver find them was awesome. We took the kids by a pond that was full of bullfrogs. The kids thought they were so funny hopping around. Oliver got so excited every time he was able to spot one. But that was nothing compared to his excitement of seeing a doe and her two fawns napping in the grass!

The hardest part of the trip was leaving. Oliver gave us his best meltdown to protest leaving the trailer and side-by-side behind. If he was able to stay forever, he would! Watching the kids explore the ranch was probably the best part of this crazy year. Their excitement and curiosity was contagious. With the craziness going on the world, it’s nice to escape to someplace off the grid and away from all the chaos. Nature really is the best medicine.

Shopping through some of my links provides me with a small commission from the brands that I work with. Happy Shopping!